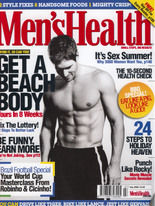 Men's Health Magazine decided to change the body shape of 8 men of all sizes and backgrounds. These men were put on a strict training and diet regime. To kick their energy, fat burning and muscle building into high gear, Men's Health asked LA Muscle to supply them with some of the best-selling LA Muscle products and advice.

The Men's Health Beach Body Challenge was featured in the July edition of Men's Health. All participants had their body measured and checked before and after the 8 weeks and verified by Men's Health.

The following are the results as recorded and published by Men's Health. As you will see, all participants taking LA Muscle supplements made dramatic gains in muscle size as much as 5kgs and reduced their body fat by as much as 9%.

All photos and select text are copyright of Men's Health Magazine. 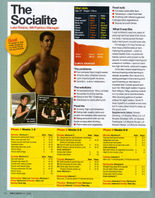 Overseas travel, fashion shows, genetics and partying had made Luke not too pleased with his body. Luke's goal was to keep his size and drop his bodyfat as much as possible. 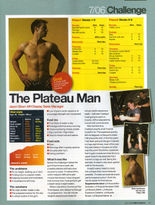 Jason found it hard to bulk up, prepare meals, stay focused and motivated. This is a common problem amongst many people.

Jason's goal was to shift his gut and get some T-shirt muscles.

At the end of the 8 weeks, Jason put on 4.5 kgs, lost 1.2% bodyfat, increased his arms by 4 cms, chest by 6cms, shoulders by 10cms and legs by 6 cms. A Massive change on body shape and body composition. 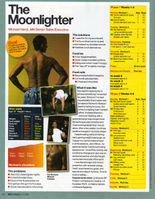 Michael works late nights as a DJ, ate a lot and had some injuries.

Michael's goals were to add more muscle to his top half while getting a six pack and a V-Shape.

At the end of the challenge Michael had added 2.5kgs of muscle, lost 4.2% bodyfat, added 3.5 cms to his arms, 6 cms to his chest, 11 cms to his shoulders and 4 cms to his legs as well as losing 3 cms from his waist; a great body transformation. 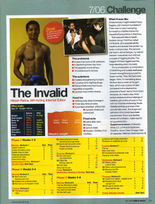 Hitesh had a back problem, small appetite and intolerance to lactose. His goals were to get a six pack and sort out his dodgy back in the process.

At the end of the challenge, Hitesh added 2 cms to his chest, lost 8 cms from his waist and added 6 cms of muscle to his legs. 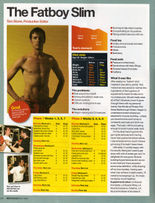 Tom had a bulky midrift, uneven posture and difficulty finding time to eat.

Tom's goal was to muscle up his skinny frame while losing his bear gut. 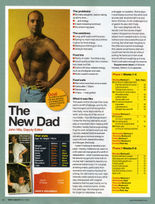 John had a new baby taking up a lot of his time and energy, a back-breaking workload and was advancing in years!

John's goal was to shift his midrift fat and develop a V-shape torso without missing out on nappy duty!

To help John with his goals for the 8 week Men's Health Beach Body Challenge, John took LA Muscle's CLA as in Sculpt. 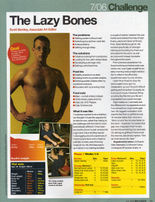 Scott had a problem getting his proteins from meals, had knee problems and was not getting enough sleep.

Scott's goals were to lose his belly, get fit for a trialathlon without getting out of bed early.

At the end of the 8 weeks, Scott lost 6kgs of weight, a massive 9% of bodyfat, added 7 cms to his chest, lost 7 cms from his waist and 10 cms from his stomach. What a transformation! 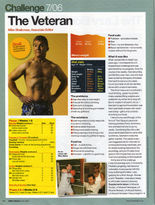 Mike found it harder to lose weight and had early lack of progress. He was looking to slim down and improve his muscle tone.

At the end of the 8 week challenge Mike had lost 4.8kgs of weight, 3% bodyfat, 3 cms off his waist and 3cms of fat from his chest.

If you are ready for your own Beach Body Transformation, head on over to LA Muscle's Products and try some "body changers" as tried and tested by Men's Health.